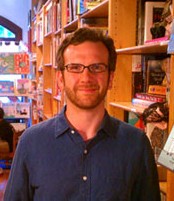 Thai Jones studies radical social movements, New York City history, and Environmental History in the United States. He is the author of two books. The latest, More Powerful Than Dynamite: Radicals, Plutocrats, Progressives, and New York's Year of Anarchy (Bloomsbury, 2014 [2012]), rediscovers a forgotten political crisis that roiled New York City in the early twentieth century. His first book, A Radical Line: From the Labor Movement to the Weather Underground, One Family's Century of Conscience (Free Press, 2004), explored his own family’s long history of political dissent against the backdrop of twentieth century social movements. He is currently working on Boomtown, a history of labor and the environment in Progressive Era gold-mining communities. Before becoming Lehman Curator, Jones was an assistant professor of history at the Bard College Master of Arts in Teaching Program. Formerly a reporter for Newsday, his writings have appeared in a variety of national publications, ranging from the New York Times to The Nation, to the Occupied Wall Street Journal.

A Radical Line: From the Labor Movement to the Weather Underground, One Family's Century of Conscience (Free Press, 2004)

“From Tsarist Russia to Zuccotti Park, The Paradox of Anarchism,” The Forward (2011)