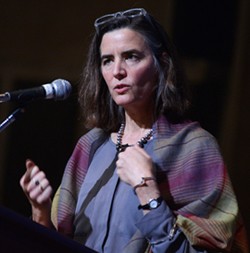 Pamela H. Smith, professor, specializes in early modern European history and the history of science. Her current research focuses on attitudes to nature in early modern Europe and the Scientific Revolution, with particular attention to craft knowledge and historical techniques.  She is founding director of The Making and Knowing Project, founding director of The Center for Science and Society, and chair of Presidential Scholars in Society and Neuroscience.

HIST UN2978. Science and Pseudoscience: Alchemy to AI
Tuesdays and Thursdays 4:10pm-5:25pm
During the 2020 US presidential election and the years of the COVID-19 pandemic,
science and “scientific truths” were (and are) fiercely contested. This course provides a
historical perspective on the issues at stake, and shows how science and pseudoscience
developed in tandem in the period from 1400 to 1800. This historical account equips
students to examine contemporary issues of expertise, the social construction of science,
pluralism in science, certainty and uncertainty in science, as well as critical engagement
with contemporary technologies.

HIST GU4101. The World We Have Lost: Daily Life in Pre-Modern Europe
Mondays 10:10-12
This course examines the material circumstances of life and death in Europe from the
fifteenth to the eighteenth century. But it will also ask the question of whether we can
enter into the inner life of people who lived in the past. The material conditions of life
are one thing, but how people experienced those conditions is quite another. How did
they respond intellectually and emotionally to their material circumstances? Finally, the
course will investigate the methods employed by historians to gain knowledge about the
material conditions of life in the past.

HIST GU4962. Making and Knowing in Early Modern Europe: Hands-On
History
Tuesdays 10:10-12
This course introduces undergraduate and graduate students to the materials,
techniques, contexts, and meanings of skilled craft and artistic practices in early modern
Europe (1350-1750), in order to reflect upon a series of topics, including craft knowledge
and artisanal epistemology; the intersections between craft and science; and questions
of historical methodology in reconstructing the material world of the past. The course
will be run as a “Laboratory Seminar,” with discussions of primary and secondary
materials, as well as hands-on work. The class sessions include discussion sessions and
hands-on work in the Making and Knowing Laboratory.
Follow The Making and Knowing Project on Twitter.

From Lived Experience to the Written Word: Reconstructing Practical Knowledge in the Early Modern World (University of Chicago Press, 2022)

The Body of the Artisan: Art and Experience in the Scientific Revolution (University of Chicago Press, 2004; 2018).

“Historians in the Laboratory: Reconstruction of Renaissance Art and Technology in the Making and Knowing Project,” Art History, special issue on Art and Technology, 39.2 (2016): 210-233 (co-authored with the Making and Knowing Team; students from the 2014-15 Columbia University course, Hist G8906: Craft and Science: Making Objects in the Early Modern World; students in the University of Amsterdam M.A. in conservation and restoration of cultural heritage, metals specialization course; and students from the V&A/RCA PhD in History of Design).

“Between Nature and Art: Casting from Life in Sixteenth-Century Europe,” Making and Growing: Anthropological Studies of Organisms and Artefacts, Elizabeth Hallam and Tim Ingold, eds. (Ashgate, 2014).

“In the Workshop of History: Making, Writing, and Meaning,” Shaping Objects: Art, Materials, Making, and Meanings in the Early Modern World, an article series of West 86th: A Journal of Decorative Arts, Design History, and Material Culture, 19 (2012): 4-31.

“Why Write a Book? From Lived Experience to the Written Word in Early Modern Europe,” Bulletin of the German Historical Institute, 47 (Fall 2010): 25-50.

“Vermilion, Mercury, Blood, and Lizards: Matter and Meaning in Metalworking,” in Materials and Expertise in Early Modern Europe: Between Market and Laboratory,” ed. by Ursula Klein and Emma Spary (University of Chicago Press, 2010), pp. 29-49.

“Collecting Nature and Art: Artisans and Knowledge in the Kunstkammer,” in Engaging With Nature: Essays on the Natural World in Medieval and Early Modern Europe, ed. Barbara Hannawalt and Lisa Kiser (University of Notre Dame Press, 2008), pp. 115-136.

“Artisanal Knowledge and the Representation of Nature in Sixteenth-Century Germany,” The Art and History of Botanical and Natural History Treatises, ed. Therese O'Malley and Amy Meyers (Washington D.C., The National Gallery Center for the Advanced Study of the Visual Arts, 2008), 14-31.

“Giving Voice to the Hands: The Articulation of Material Literacy in the Sixteenth Century,” Popular Literacy: Studies in Cultural Practices and Poetics, ed. John Trimbur, University of Pittsburgh Press, 2001, pp. 74-93.