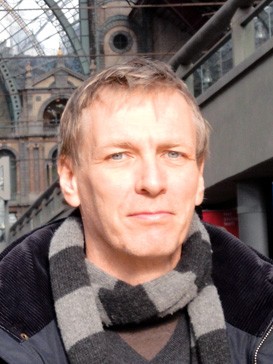 Marc Van De Mieroop, professor, is a specialist of the history of the ancient Near East from the beginning of writing to the age of Alexander of Macedon. Besides teaching at Columbia University, he has taught at the University of Oxford and at Yale University. He is the Director of Columbia’s Center for the Ancient Mediterranean and Founding Editor of the Journal of Ancient Near Eastern History.

He is the author of more than 100 articles and reviews, and has published numerous books on various aspects of ancient Near Eastern history, Egyptian history, and World History. His interests include socio-economic and political history, and he has written extensively on historical methodology as it applies to his field of study. His current research focuses on the intellectual history of ancient Babylonia and his last book, Philosophy before the Greeks: The Pursuit of Truth in Ancient Babylonia, written while he was a Guggenheim Fellow in 2013-14, studies Babylonian epistemology. His ongoing project, Babylonian Cosmopolitanism and the Birth of Greek and Hebrew Literate Traditions, received support from the ACLS during the academic year 2016-17.

Sumerian Administrative Documents from the Reigns of Ishbi-Erra and Shu-ilishu, 1987.

Society and Enterprise in Old Babylonian Ur, 1992.

Cuneiform Texts and the Writing of History, 1999. Translated into Polish.

The Eastern Mediterranean in the Age of Ramesses II, 2007.

Ur III Tablets from the Columbia University Libraries (with Steven Garfinkle and Herbert Sauren), 2010.

A History of Ancient Egypt, 2011. Translated into Turkish.

Crossroads and Cultures. A History of the World’s People (with Bonnie Smith, Richard von Glahn, and Kris Lane), 2012.

Sources of Crossroads and Cultures. A History of the World’s People (with Bonnie Smith, Richard von Glahn, and Kris Lane), 2012.

Philosophy before the Greeks. The Pursuit of Truth in Ancient Babylonia, 2015.
Translated into Chinese

World in the Making: A Global History (with Bonnie Smith, Richard von Glahn, and Kris Lane), 2019.

Sources for World in the Making (with Bonnie Smith, Richard von Glahn, and Kris Lane), 2019.

Debt and Economic Renewal in the Ancient Near East (with Michael Hudson), 2002.

Jean-Jacques Glassner, The Invention of Cuneiform. Writing in Sumer (with Zainab Bahrani), 2003.

Mario Liverani, Myth and Politics in Ancient Near Eastern Historiography (with Zainab Bahrani), 2004.