MA/MSc in International and World History
Hannah A. Farber 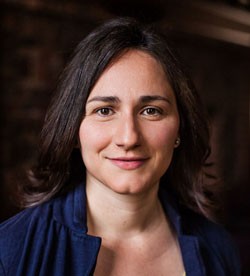 Hannah A. Farber
Assistant Professor of History, Department of History

Professor Hannah Farber specializes in the political economy of colonial North America, the early American republic, and the Atlantic World. Her first book, Underwriters of the United States (Omohundro Institute of Early American History and Culture/UNC Press, 2021) explains how the transnational system of marine insurance, by governing the behavior of American merchants, influenced the establishment and early development of the American republic.

Additional research interests include early modern globalization and the visual and material culture of ocean commerce. Early-stage projects include a cultural history of interest rates and a study of commercial property marks as phenomena with visual, material, and legal aspects.

Hannah Farber is a series editor for American Beginnings, 1500-1900, at the University of Chicago Press, and a frequent co-organizer of the Columbia University Seminar on Early American History and Culture.

She was a 2020-2021 recipient of a National Endowment for the Humanities Fellow at the New-York Historical Society.

“State-Building After War’s End: A Government Financier Adjusts his Portfolio for Peace,” Taking Stock of the State in Nineteenth-Century America, Journal of the Early Republic, Vol. 38, No. 1 (Spring 2018): 67-76.

[In Progress:] Manuscript: Underwriters of the United States.

“Nobody Panic: The Emerging Worlds of Economics and History in America,” book review of Jessica Lepler, The Many Panics of 1837: People, Politics, and the Creation of a Transatlantic Financial Crisis (Cambridge, 2013), and Jonathan Levy, Freaks of Fortune: The Emerging World of Capitalism and Risk in America (Harvard, 2012),Enterprise and Society, Fall 2015.

“Enlightenment in the Margins,” review of Caroline Winterer, “The American Enlightenment: Treasures from the Stanford University Library,” Common-Place.org, Sept. 2011.