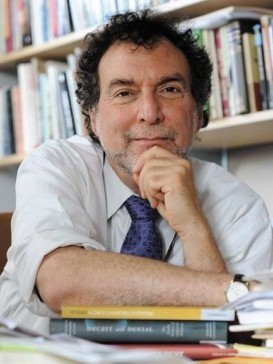 David Rosner is Professor of History and Ronald H. Lauterstein Professor of Sociomedical Sciences at Columbia University. He also co-directs the Center for the History and Ethics of Public Health, a joint undertaking of Columbia's Mailman School of Public Health and the Department of History. An elected member of the National Academy of Medicine, he received his BA from CCNY, his MPH from the University of Massachusetts and his PhD from Harvard in the History of Science. Until moving to Columbia in 1998, he was University Distinguished Professor of History at the City University of New York. In addition to numerous grants, he has been a Guggenheim Fellow, a recipient of a Robert Wood Johnson Investigator Award, a National Endowment for the Humanities Fellow and a Josiah Macy Fellow. He has been awarded the John P. McGovern Science and Society Prize by Sigma Xi, The Scientific Research Society, Distinguished Scholar's Prize from the City University, the Viseltear Prize for Outstanding Work in the History of Public Health from the APHA and the Distinguished Alumnus Award from the University of Massachusetts. He has also been honored at the Awards Dinner of the New York Committee on Occupational Safety and Health and he and Gerald Markowitz have been awarded the Upton Sinclair Memorial Lectureship For Outstanding Occupational Health, Safety, and Environmental Journalism" by the American Industrial Hygiene Association. He recently was award the prize for “Outstanding Scholarship on the History of Work and Health,” by the International Commission on Occupational Health, Scientific Committee on the History of Prevention of Occupational and Environmental Disease. He gave the Garrison Lecture to the American Association for the history of Medicine and is a Fellow of the New York Academy of History and history editor for Public Health Reports.

“A Short History of Occupational Safety and Health,” (with Gerald Markowitz), in Martin Halliwell, ed. The Edinburgh Companion to the Politics of American Health, (Edinburgh: University of Edinburgh Press, 2022).

"A Short History of Occupational Safety and Health in the United States," (with G. Markowitz), Public Health Then and Now,  (Published online ahead of print, March 19, 2020, e1-e7.

“’Unleashed on an Unsuspecting World’: The Asbestos Information Association and Its Role in Perpetuating a National Epidemic”  (with G. Markowitz), American Journal of Public Health, 106 (May 2016).

“Educate the Individual . . .to a Sane Appreciation of the Risk”: A History of Industry’s Responsibility to Warn of Job Dangers Before the Occupational Safety and Health Administration,” American Journal of Public Health, 106 (January 2016), 28-35.

“From Silicosis To Silica Hazards: An Experiment In Medicine, History, And The Social Sciences" (with Paul-Andre Rosental and Paul Blanc), American Journal Of Industrial Medicine (2015).

Vaccine Hesitancy and the Decline of the American Experiment? Milbank Quarterly, September 8, 2021, Available at: https://www.milbank.org/quarterly/opinions/vaccine-hesitancy-and-the-decline-of-the-
american-experiment/ .

“Beyond the Call of Duty,” Annual Award, The Child Lead Action Project, 2010.

Other Significant Grants, Fellowships and Honors