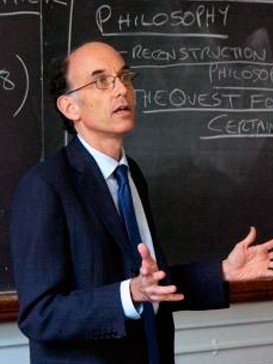 Casey Nelson Blake works on modern U.S. intellectual and cultural history, with an emphasis on the relationship between artistic modernism and cultural criticism.  His publications include Beloved Community:  The Cultural Criticism of Randolph Bourne,Van Wyck Brooks, Waldo Frank, and Lewis Mumford, The Arts of Democracy: Art, Public Culture, and the State, and The Armory Show at 100: Modernism and Revolution—the last a catalogue for a major exhibition on the centennial of the Armory Show at the New-York Historical Society for which he served as Senior Historian.  He also writes regularly for Commonweal, Dissent, Raritan, and other journals of opinion. He is currently at work on At the Center: American Thought and Culture, 1948-63, co-authored with Howard Brick and Daniel Borus, as well as an intellectual biography of the writer and critic Paul Goodman.

Professor Blake came to Columbia in 1999 as founding Director of the Center for American Studies after directing American Studies programs at Indiana University and Washington University, and teaching at Reed College.  While at Columbia Professor Blake has overseen the development of a civic engagement initiative within the Center, which has as its centerpiece the “Freedom and Citizenship” partnership program with the Double Discovery Center.

The Armory Show at 100: Modernism and Revolution

The Arts of Democracy: Art, Public Culture, and the State