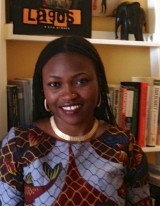 Abosede George is a historian of Modern Africa. She joined the faculty of Barnard College and Columbia University in 2007.

At Barnard and Columbia she teaches undergraduate and graduate courses on African urban history, the history of childhood and youth in Africa, women, gender, and sexuality in African History, and African migrations since the mid-20th century.

Her book, Making Modern Girls: A History of Girlhood, Labor, and Social Development received the Aidoo-Snyder Book Prize in 2015 from the Women's Caucus of the African Studies Association, as well as Honorable Mention from the New York African Studies Association. Her essays have appeared in the American Historical Review, the Journal of Social History, Comparative Studies in South Asia, Africa, and the Middle East, Meridians, Women’s Studies Quarterly, the Journal of West African History, and The Washington Post among other outlets.

Her research is focused on the histories of Lagos, Nigeria, and West Africa, and on social history and urban history within that. Her current research examines Lagos as a destination and a place of convergence for migrant diasporic and refugee communities from the mid to late 19th century. Coming from the colony of Freetown, Sierra Leone, the island of Cuba, the Brazilian Empire, and interior Yorubaland, migrant communities reshaped notions of community and belonging in 19th century West Africa. As part of this research, she developed The Ekopolitan Project, a digital archive of family history sources on migrant communities in nineteenth- and twentieth century Lagos, West Africa. Visit: www.ekopolitanproject.org

She maintains faculty affiliations with the Africana Studies Program at Barnard, the Institute for African Studies at Columbia (IAS), the Barnard Center for Research on Women (BCRW), and the Center for the Critical Analysis of Social Difference (CCASD). She received her B.A. from Rutgers University (1999) and her Ph.D. from Stanford (2006).

“Getting the Hang of It,” Scholar and Feminist Online: Gender, Justice, and Neoliberal Transformations, Fall 2013