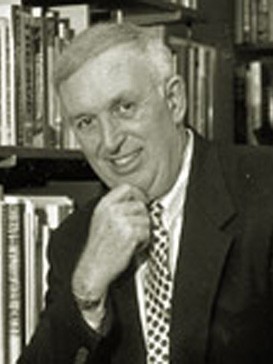 Kenneth T. Jackson is Director of the Herbert H. Lehman Center for American History and the Jacques Barzun Professor of History at Columbia University, where he has also chaired the department of history.  A graduate of the University of Memphis (B.A., magna cum laude, 1961) and the University of Chicago (M.A., 1963; Ph.D., 1966), he served for three years as an officer in the United States Air Force before joining the Columbia faculty as an assistant professor in 1968.  Promoted to associate professor in 1971, to full professor in 1976, and to the Andrew W. Mellon professorship in 1987, he assumed the Barzun professorship, which honors one of the nation’s most distinguished men of letters, in 1990.  He has served as president of the Urban History Association (1994-1995), the Society of American Historians (1998-2000), the Organization of American Historians (2000-2001), the New York Historical Society (2001-2004), and the New York Academy of History (2015-present).  He has been a Fulbright Lecturer in Germany, Australia, and Japan and a visiting professor at Princeton, UCLA, and the George Washington University.  He has lectured at hundreds of colleges, universities, civic groups, and historical societies around the world, and he has been a featured guest on the NBC Today Show, ABC World News Tonight, ABC Nightline, CBS Evening News, CBS Up to the Minute, CNN, the History Channel, East West Television, and more than sixty documentary productions.  He has won fellowships from the National Endowment for the Humanities, the American Council of Learned Societies, the Woodrow Wilson National Fellowship Foundation, the John Simon Guggenheim Memorial Foundation, and the Century Foundation.  In addition to five honorary doctorates (the City University of New York, St. Peter's College, the State University of New York, the University of the South, and Wagner College), he has received Hunter College’s Donald Sullivan Award, the University of Memphis’ Distinguished Alumni Award, the St. Nicholas Society’s Gold Medal of Merit, Pi Kappa Alpha Fraternity’s Order of the West Range, the Episcopal Diocese of New York's Servant of Education Award, the Skyscraper Museum’s Notable New Yorker Award, the College of Physicians and Surgeons’ Distinguished Award in the Humanities, the Delbarton School's Delbarton Medal,  the West Side Spirit's West Sider of the Year Award, the University Seminar's Tannenbaum-Warner Award, the New-York Historical Society's Pintard-Benson Centennial Medal, Columbia University's Nicholas Murray Butler Medal, the New York Post's Liberty Medal, and the National Institute of Social Sciences' Gold Medal. In 2016, President Lee Bollinger awarded him Columbia's highest recognition, the Alexander Hamilton medal.

A past or present member of the editorial boards of numerous professional journals, Professor Jackson is the general editor of the Columbia History of Urban Life, thirty volumes of which had appeared as of 2018.  He was the editor-in-chief of the Dictionary of American Biography from 1990 to 1996, and of the Scribner’s Encyclopedia of American Lives from 1996 to 2005.  He is the co-author with Camilo J. Vergara ofSilent Cities: The Evolution of the American Cemetery (Princeton Architectural Press, 1989).  His other books include The Ku Klux Klan in the City (Oxford, 1967); Atlas of American History (Scribner’s, revised edition, 1978); Cities in American History (with Stanley K. Schultz: Alfred A. Knopf, 1972); and American Vistas (with Leonard Dinnerstein), which went through seven editions between 1970 and 1998.  His latest book, written in collaboration with David Dunbar, is Empire City: New York Through the Centuries (Columbia, 2002).  Professor Jackson’s best known publication,Crabgrass Frontier: The Suburbanization of the United States (Oxford, 1985), was a selection of the History Book Club and was the subject of special sessions of the American Historical Convention in 1985, the Southern Historical Convention in 1986, and the Organization of American Historians Convention in 1998.  It won both the Francis Parkman and the Bancroft Prizes, and the New York Times chose it as one of the notable books of the year.   By 2018, it had been reprinted five times in hardcover and forty times in paperback.

In collaboration with Vergara, Jackson has created two important public exhibitions.  The first, “Transformed Houses,” was a Smithsonian Institution project that focused on domestic architecture in working class neighborhoods.  The second, sponsored by the Municipal Art Society in Manhattan, dealt with physical devastation in ghetto areas and was exhibited in more than a dozen venues around the United States.

Professor Jackson is the editor-in-chief of the 2 million word (an average book has about one-twentieth that many words) Encyclopedia of New York City, which was initially published in a single, 1373 page volume in 1995 by Yale University Press.  Assisted by two managing editors, two deputy managing editors, sixty-eight associate editors, twenty-five project editors, and almost seven hundred individual authors, he worked for thirteen years to create the first major reference tool for the giant metropolis in almost a century.   It was reprinted seven times and received several awards for reference excellence.  The second edition, published in 2010, and 35 percent larger than the first edition,  includes seven hundred illustrations, dozens of maps and tables, and more than five thousand individual entries (on 424 neighborhoods, 74 ethnic groups, 114 schools, 32 religious denominations, and 102 newspapers and magazines, for example).  According to the New York Times, “no one with even a passing interest in New York will be able to live without it.”  As of 2018, total sales of the encyclopedia were approaching 100,000.

A strong advocate of history as the core of social studies, Professor Jackson chaired the Bradley Commission on History in Schools (1987-1990), a nationwide effort to improve and expand history teaching in America’s elementary and secondary institutions.  He then founded and served as the first chairman of the National Council for History Education, a larger and more ambitious organization with a similar mission.  Headquartered in Ohio, it now has a multi-million dollar annual budget, seven thousand dues-paying members, and active affiliates in more than forty states; by 2018, its recommendations had already influenced curricular reform in fifteen states and hundreds of school districts.  In addition, Professor Jackson has directed seven National Endowment for the Humanities Summer Seminars for either high school or college instructors and eleven intensive summer programs for the Gilder-Lehrman Institute for American History. He was a member of the New York State Social Studies Syllabus Review Committee in 1990 and the National Council for History Standards between 1992 and 1996.

Although he has been welcomed to Windsor Castle by Queen Elizabeth II, to Lambeth Palace in London by the Archbishop of Canterbury, to the White House by President William Jefferson Clinton, and to the Governor's Mansion in Albany by George Pataki, Professor Jackson is most at home in the subways, back streets, and gritty neighborhoods of New York City, where he has been leading all-night bicycle rides, three-hour walking tours, and all-day bus trips for decades.  At Columbia, he teaches courses in urban, social, and military history.   In 1989, the students of the college honored him as teacher of the year and gave him their 28th annual Mark Van Doren Award for “humanity, devotion to truth, and inspiring leadership.”  In 1993, Playboy magazine named him as one of the most popular professors in the nation.  In 1996, Columbia President George Rupp appointed him co-chairman of the University’s 250th anniversary commemoration.  In 1999, the Society of Columbia Graduates chose Professor Jackson for its annual Great Teacher Award.  In 2001, the New York Council for the Humanities selected him as New York State Scholar of the Year.

A former vestryman (1997-2004) of historic Trinity Church on Wall Street in lower Manhattan, Jackson is an elected member of Phi Beta Kappa, the Century Association, the Society of American Historians, the New York Academy of History, the American Antiquarian Society, and the American Academy of Arts and Sciences.  He is a trustee of the Henry Luce Foundation (since 2002), the Regional Plan Association (since 2002), the Society of American Historians (since 1970), the New-York Historical Society (since 1996),  the Columbia University Seminars (since 1985), and the National Council for History Education (1990-2005).  He is a former trustee of the New York State Historical Association, the New Castle Historical Society, the South Street Seaport Museum, the Skyscraper Museum, the Organization of American Historians, the Urban History Association, Transportation Alternatives, and the Prague Institute for Global Urban Development.  He is a member of the advisory board of the Gilder-Lehrman Institute of American History and of the Directors Council of the Historic House Trust of New York City, and he is a steward of the New York State Archives Partnership Trust.   He is listed in Who’s Who in America and Who's Who in the World.  His wife, Barbara Bruce Jackson, who retired as chair of the English department at Blind Brook High School in Rye Brook, New York, is currently chairman of the board of Neighbors Link, a social service organization for recent immigrants.  They live in New York City and in suburban Westchester County.

The Almanac of New York City

Crabgrass Frontier: the Suburbanization of the United States

Silent Cities: The Evolution of the American Cemetery

The Neighborhoods of Brooklyn

Robert Moses and the Modern City: The Transformation of New York

"All the World's a Mall: Reflections on the Social and Economic Consequences of the American Shopping Center," American Historical Review, October 1996, pp. 1111-1121.

"NCHE: Where School and University Meet," The History Teacher, February 1998.

"The Power of History: The Weakness of a Profession," The Journal of American History, March 2002.

"Seemingly Insignificant: The Importance of Ordinary Artifacts from the World Trade Center," The New York Journal of American History, Fall, 2004, 141-142.

"The Operator," Review of Kenneth D. Ackerman, Boss Tweed: The Rise and Fall of the Corrupt Pol Who Conceived the Soul of Modern New York, in Washington Post, March 27, 2005.

"The Road to Hell: The United States, Japan, and the Evolution of National Patterns of Transport and Suburban Housing," in Proceedings of the Kyoto American Studies Seminar, August 1-3, 2005, (Center for American Studies, Risumeikan University, Kyoto, 2006), pp. 93-110.

"From These Honored Dead: Memorial Day and Veterans Day in American History,"History Now.

"Asher B. Durand's New York: the Life of the City in the Nineteenth Century, " in Linda Ferber ed., Asher B. Durand and the American Landscape (London: D. Giles Limited and the Brooklyn Museum, 2007), pp. 27-44.