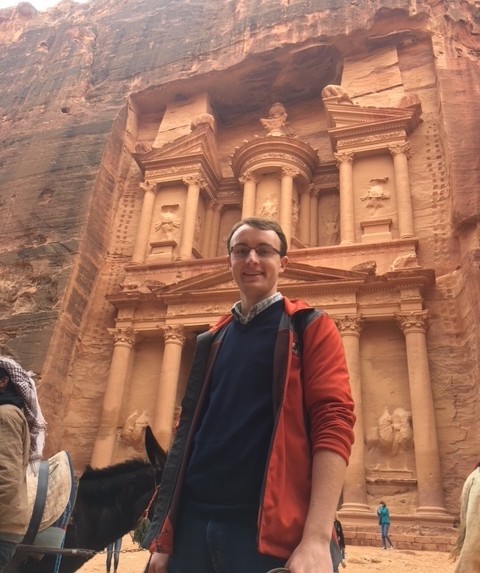 As an undergraduate, Casey majored in International Relations – History at the University of California, San Diego (UCSD). While at UCSD, Casey began taking courses in Arabic on a whim during his first quarter, and the unique cross-cultural learning opportunities provided by the language inspired him to specialize in Middle Eastern history. To augment and add nuance to this interest, Casey took courses in US-Arab foreign policy, human rights, and Middle Eastern history, and ultimately pursued a study-abroad program in Jordan.

Casey spent five months living with a host family, interning with an international NGO, and taking courses in Amman, Jordan. Through this experience, Casey was able to improve his Arabic, learn more about Middle Eastern culture and history, and make lifelong friends. At the same time, the material he covered, experiences he gained, and people he spoke with shed light on the profound inequality and injustice of our world. As a result of his experience in Jordan, Casey spent the last six months of his college career interning with a human rights advocacy organization in Washington D.C.

In addition to his human rights advocacy work, Casey also continued to dive deeply into middle eastern history. As a capstone to Casey’s undergraduate experience, he produced an honor’s thesis entitled: Creating the Caliphate: Arab-Muslim State Formation as a Vector for Cultural Change in the 7th Century Levant.

After completing his undergraduate career, Casey sought to deepen his connection to the Middle East and North Africa (MENA) region by embarking for service with the Peace Corps in Morocco. Unfortunately, Casey’s service in Morocco was cut short due to the COVID-19 pandemic. However, during his service, Casey had a unique opportunity to combine his foreign aid, human rights, and linguistic experience to both participate in and critique Peace Corps policy, and foreign aid and humanitarianism more generally. It was this experience that seeded the idea for Casey’s prospective thesis project: to interrogate American foreign aid practices in the MENA region, and interpret their successes through the lens of tangible benefits derived by recipient populations over foreign policy and soft power victories. In this way, Casey hopes to uncover how much of the modern US foreign aid system is based in Cold War calculus, and how much—if any—is based in authentic goodwill.